The Sun Pacific Solar Electric team is comprised of several licensed Journeyman Electricians, electrical contractors, and installers with specialized training such as the SunPower Corporation Advanced Level Installation and Design Training, the Outback Power Certification program, the NABCEP PV Installation Professional Board Certification, and marine electrical repairs. Our in-house certified electricians have over 60 years combined electrical experience and our sales team has over 10 years experience. All of our employees are local and take great pride in their work. Each plays a vital part in solarizing our community one house or building at a time, and their experience is key to our award winning track record and rave customer reviews. 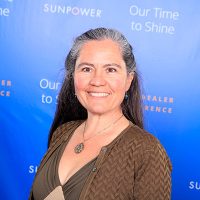 In the late 90’s Ceci successfully operated her own marine canvas sewing business. In 1996 she and her husband, Jay, completely remodeled their trimaran, equipping it with a solar array, a rarity at the time. From there on, they independently built custom solar systems for others for several years until founding Sun Pacific Solar Electric, Inc in 2007. Ceci started managing Operations, Business Development, and Public Relations, and then became President and CEO in 2015. She is certified by Women’s Economic Ventures, is certified as a Woman-Owned Woman-Operated Business by NWBOC, and has studied Business and Accounting extensively.

Vice President. Wesly has been working for Sun Pacific Solar since 2008. He recently obtained his C-10 license and he has completed the Outback Power certification program, the LG battery certification, as well as other specialized certification programs. Wesly leads our battery back-up efforts with his extensive background in DC-Coupled, AC-Coupled, Grid-tied and Off-Grid battery systems. He graduated from the SBCC art program. Wesly is a fashion designer at Wesly Designs, a woodworker, photographer and avid sailor. 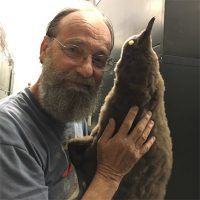 Jay has over 40 years experience in the electrical trade. He has been designing and installing solar electrical systems since 1996.

Alan grew up in Santa Barbara and worked for Sun Pacific Solar from 2008 to 2014, returning back to our team in 2020. Alan’s background in solar installation and customer service, meet at the intersection of the needs of our crews and customers. Alan serves as a liaison between our teams and our customers, working in the office as our procurement manager.

Lainie is a Michigan native and graduate of Central Michigan University with a Bachelors’ degree in Journalism and Public Relations. In 2020, she relocated to Santa Barbara from Eugene, Oregon to join our office team. Lainie has maintained a passion for renewable energy and environmentally conscious living, in addition to bringing her experience in public relations, marketing, management, customer service, and e-commerce. 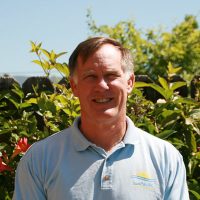 Blake has been a Santa Barbara resident for the past 10 years. He received his Bachelor’s and Master’s degree in Mechanical Engineering  from UCSB, graduating in 1979. After a 10 year career as a consulting engineer in software sales, he relocated to Santa Barbara and opened a golf practice in Carpinteria. He is passionate about renewable energy, and his home was one of our first solar electrical installations. He was so impressed with the experience that he received with our installation, that he asked to join our team. We were inspired by his knowledge and excitement, and welcomed him into our solar family. He has been married for 30+ years to his lovely wife Ruth, with whom he has three wonderful grown children. He loves golf and traveling. 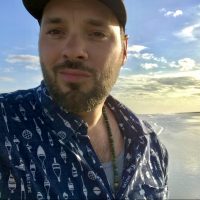 Fraser’s love of nature has been woven through all facets of his life and his career has centered around inspiring appreciation of the environment through developing and supporting innovative businesses that build a better world. Once his son was born, Fraser decided that he wanted to make a larger impact on the planet. He believes that through renewable energy he can do his small part to help build a world that he can be proud of for his son. Fraser joined the Sun Pacific team in 2019 with a background in business development, outdoor education, wilderness medicine, and the Paddle Sports industry. He co-founded Paddle Sports, an outdoor adventure company in 2010. Fraser is an avid outdoorsman, certified wilderness first responder, master stand-up paddle board instructor trainer and spends his time outside of work exploring our abundant world with his family. 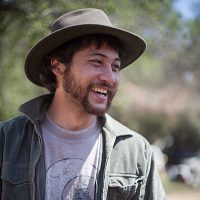 Connor has been working with us since 2008. When he joined our team, he brought with him two years of solar installation experience. He is a licensed electrician, has completed the Outback Power certification program, the SunPower Corporation Advanced Level Installation and Design Training and is a NABCEP Certified PV Installation Professional. Connor is also a talented song writer and musician.

Fabian grew up in the Santa Barbara-Carpinteria area. He worked as a head machinist in a machine shop for many years. He studied Solar Electricity at SBCC, before coming to work at SPSE. He has been with us since 2014. Fabian is a fourth term apprentice electrician and he has also completed SunPower Corporation Advanced Level Installation and Design Training. He is passionate about music, and he is the drummer in a band that plays locally and throughout Southern California. He loves the outdoors and has a strong interest in the natural world. 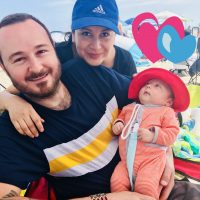 Steven is originally from Modesto, CA but has lived in Santa Barbara for the last 6 years. He had 5 years of residential electrical experience before joining the Sun Pacific team. He is married and had a son in May 2019. Steven enjoys spending time with his family, going to the beach, cooking and riding motorcycles. 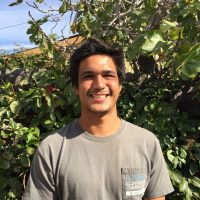 Makani graduated from Santa Ynez Union High School and worked in construction for several years before joining us in June 2019. He is enrolled in the Electrician Trainee Program through WECA (Western Electrical Contractors Association). Makani grew up in Goleta and Hawaii where he was an avid surfer and enjoys being outside. 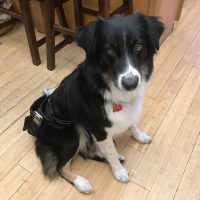 Peppa is a one year old Australian Shepherd from the Oregon Coast. She loves getting belly rubs, going to Hendry’s Beach, and making friends with every human and canine she meets. 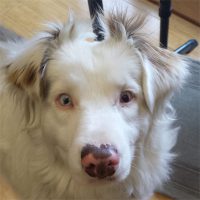 Another rescued Aussie. Although she has difficulty seeing and hearing, she navigates the world with a blissful vigor that we all find charming and refreshing. Easily the happiest creature on the planet, she’s sure to win you over while she enthusiastically recommends the efficiency and reliability of SunPower solar panels. 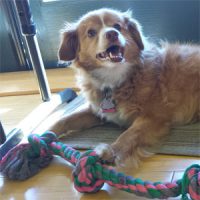 A rescued miniature Australian Shepherd who captivates everyone with his facial expressions and silly little gallop. Copper’s favorite panels are SunPower brand, and although he has difficulty installing them without thumbs, we have a great crew to help him out.

“Everything was done neatly and professionally and the system has been working perfectly for five years now. I would highly recommend Sun Pacific Solar.”

“Sun Pacific has continued to contact me and check up on the performance of the panels as well as to be sure that I understand the electric company’s billing. I have already recommended them to friends.”

“Our son-in-law suggested Sun Pacific Solar, telling us he was very satisfied with their work, their business ethics, and the thoroughness of their planning and implementation. We found his recommendation absolutely on target! We are more than happy with every aspect of the job that Sun Pacific Solar has done for us.”

“The team at Sun Pacific Solar Electric gave us amazing service. I just wish that every other professional or tradesperson in every other field was like these folk. Kind, courteous, fast, knowledgeable – attentive to detail to the max and smart smart smart. Highly recommend them!”

“The installers are professional, and their work is one of a craftsman. When I compare the appearance of our system with one from a competitor on our neighbor’s house, ours is a much cleaner install, with fewer panels to generate more power! You can do all the research you want, but this is the company you will choose if you want the best for your home!!”

“Sun Pacific installed 7 very efficient panels, while other quotes needed 10 to generate the same amount of electricity. Fewer panels, less maintenance for the future. All in all, very happy!”

"Sun Pacific and its employees have done a great job with a high degree of workmanship. You have been great to work with and have been honest and forthright. Thank you for doing a great job with great workmen. I am super impressed!"

"You guys install the best solar systems that I inspect. Whenever my friends ask me who to hire, I recommend you."

“We were pleasantly surprised that the cost would be much lower than we expected, and in fact the system would pay for itself in a little over a decade.”